Kelowna’s newest taxi company is hitting the road in style.

Not only is Current Taxi billing itself as the provinces’ first entirely electric taxi service, it is using two stylish vehicles to start its fleet—Teslas.

“Our passion for offering the travelling public with a highly elevated, customer-centric transportation option is only equaled by our commitment to do so in the most environmentally responsible manner possible,” he said.

Taxi companies and service are regulated and licensed by the province and Conway said his company will charge the same amount as its competitors despite its luxury vehicles. The taxi’s will be available for booking only through a website and an app.

The grand opening of the new service will take place, appropriately, at Kelowna’s Tesla charging station at the Best Western Hotel Feb. 24.

The new taxi service using the Tesla vehicles has been up and running for a few weeks in the city, with rides being booked through local hotels because the website and app were not yet fully functional.

The service will continue to be available through the local hospitality industry, www.currenttaxi.ca and the Current Taxi app. click here. 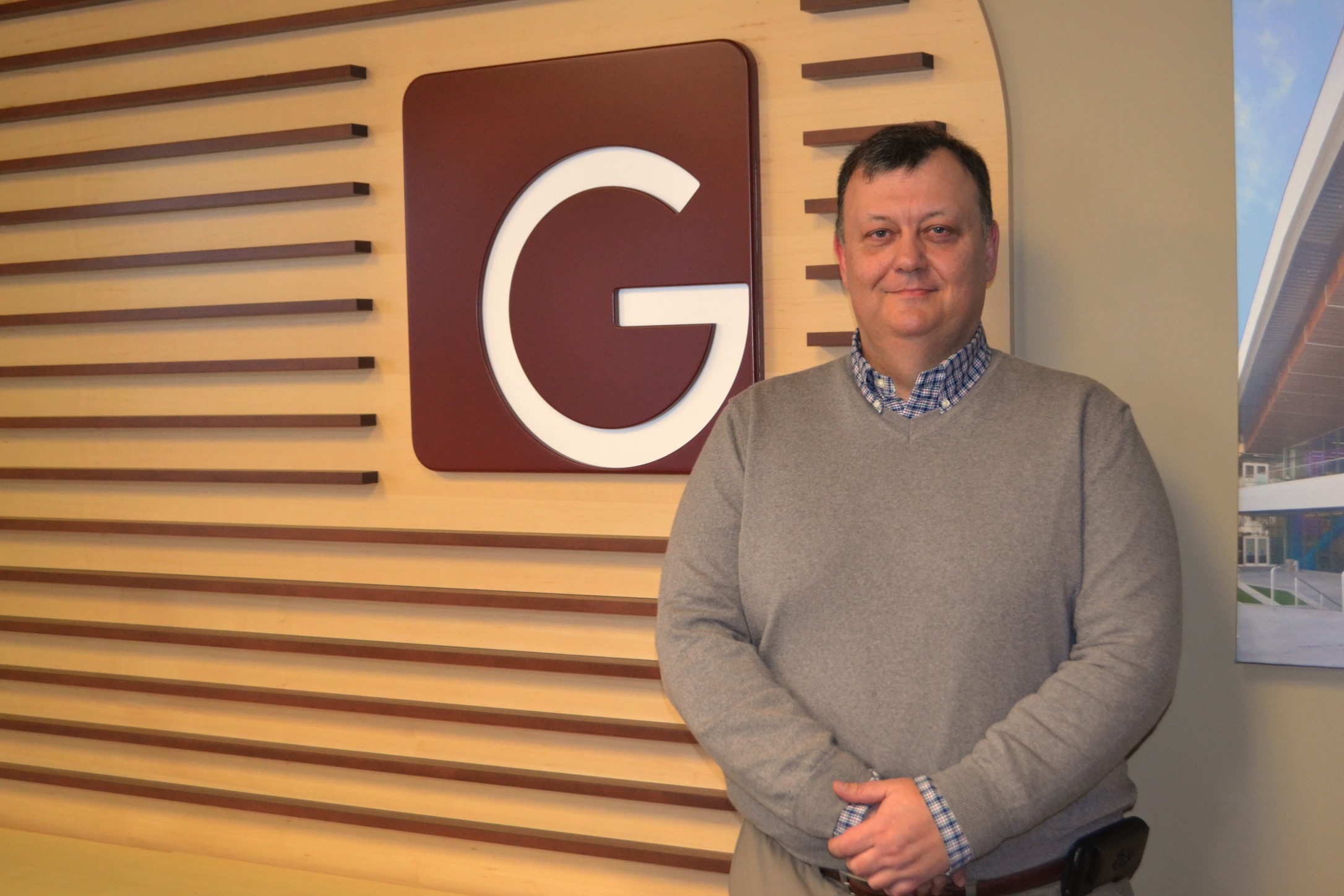 In a nondescript, industrial building in West Kelowna a pair of immigrants have built an internationally recognized company.

Geometrik Owners Vladimir and Natasha Bolshakov might not be that well known in the Okanagan “but whomever is involved in commercial construction, they are very much aware of the Geometric brand,” Vladimir says.

Sitting at a board table with his back straight and his hands folded, Vladamir is imposing but not threatening.

He and his wife Natasha immigrated to Canada in the early 2000s and his speech is still coloured by a Russian accent.

When the couple bought Geometrik in 2006 it was a small company making children’s furniture – but they knew exactly where they wanted to take it.

They both had years of experience manufacturing wood acoustic panelling, and they set about creating a brand new product.

“Me and my business partner, my best friend and my wife, we worked together in this industry since our graduation from university,” Valdamir says. “It’s now going to be 26 years since we got sucked into the manufacturing of wood acoustical ceilings and walls. All our life is here, it’s just that.”

Acoustic panelling is used in large spaces like hallways and auditoriums to dampen sound and create a more pleasant acoustic environment.

There are scores of products that can do that, but Vladamir says Geometrik’s wooden panelling is more “aesthetically intense,” appealing in buildings that want to “wow” visitors.

Starting out with just three employees, Vladimir and Natasha now employ about 30, and their product is used all over the world.

One of the big reasons for their success, Vladimir says, is the Okanagan’s unique climate, which is ideal for woodworking.

“I would probably have a hard time finding a place that’s better for woodworking industries,” he says, pointing to the regions ideal temperature and humidify, which allow them to work easily with climate-sensitive wood.

The crazy part, Vladamir admits, is that they weren’t even aware of that when they came here. Their decision to stay was based on the beauty of the region.

“We just arrived and it was a total wow effect,” he says.“It takes probably about 10 seconds to make the decision we are staying.”

Now, Vladamir says, the products from the business they built are all over the region, the country and the world.

But of everywhere Geometrik panels are found, Vladamir says Toronto’s Pearson International Airport is the most meaningful to him.

“This is our first step in Canada,” he says. He leans forward slightly and opens his hands. A smile creeps onto his face. “This is where we immigrated and now we are happy to provide them with acoustical ceilings, so it’s very emotional.”

He leans back, his smile widening.

“This is the beauty of our business. It’s not just a block of wood with a bunch of holes, there’s a storyline for almost everybody,” he says.

“We kind of hoped that we could make it when we left our shores and made it over here, and I think we are the proof that if somebody believes hard and works hard it is possible. Anything is possible, especially in Canada.” 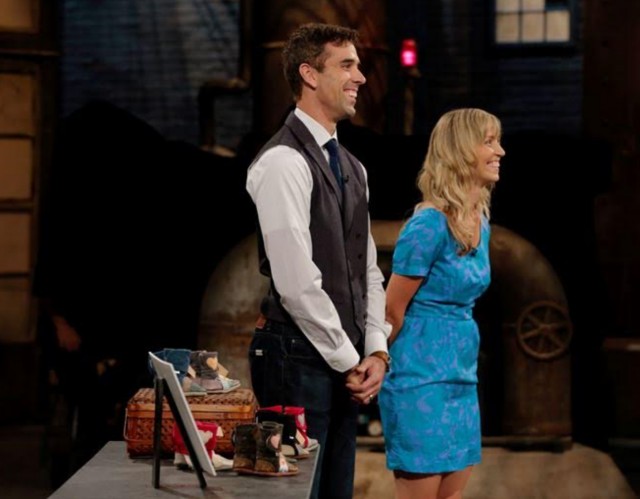 Calling all aspiring entrepreneurs – or at least those who dare to face the dragons.

Dragon's Den is holding its 2017 auditions, and Kelowna is on the list of locations where the show will be scouting for those who deserve an investment.

"The audition tour welcomes participants of all ages, with businesses at any stage of development," says a statement.

"Hopeful entrepreneurs should prepare to pitch their concept to the Dragons’ Den producers in five minutes or less. If they show the producers they have what it takes to pitch in the Den, they could be invited to Toronto to face the Dragons."

Auditions will be held in Kelowna on March 9 from 10 a.m. to 5 p.m. at Okanagan's College's Kelowna campus on KLO Road in the Centre For Learning - E building.

This is the show's 12th season.

Last season, a Kelowna company landed an investment on the show.

Nooks Design asked for a $100,000 investment in exchange for 15 per cent of the company. They had four dragons interested in investing, but settled on Manjit Minhas, who offered the money for a six per cent royalty instead of equity in the company.

Brought to you by Okanagan Peer Mentoring Group and facilitated by CanadaStartup.com, this Leadership Training Series includes topics like Supervisory Training, Self-Management Skills, Lead By Getting Out of the Way, Dealing With Conflict and Difficult People. Click here for the course calendar and descriptions.

Community Futures Central Okanagan is pleased to announce that a Business Development Bursary has been launched in the Central Okanagan as a result of a generous donation received from Kelowna Jaycees on behalf of Rene Bourgault, a young entrepreneur who passed away suddenly in 2015.

Recipients of the bursary will receive business assessment, counseling, training and funding support for their new business.

“It is the intent of this bursary to support young entrepreneurs who might not normally be able to get support for their new business” states General Manager Larry Widmer. “Rene was a passionate young entrepreneur who struggled to get support for his new business when he was starting out so it is appropriate that this bursary will go to those that need it and deserve it most” explains Widmer. “We have a lot of valuable resources that will be made available to the recipients of this bursary that will greatly improve their chances of success”.

Community Futures Central Okanagan is a community based not for profit corporation that was established in 1990 that contributes to the social and economic well being of the Central Okanagan by providing small business owners and aspiring entrepreneurs access to services tailored to their individual needs. From financing to training programs, Community Futures is a full support centre for new and existing businesses.

Larry Widmer, CMC
General Manager
Ph. 250-868-2132 ext. 223
Email: This email address is being protected from spambots. You need JavaScript enabled to view it.

Congratulations to these Central Okanagan businesses on making it to the finals for the Small Business BC Awards!

This year, 699 nominations from 72 communities across the province and over 32,000 votes were received.

These awards recognize the outstanding achievements of British Columbia's entrepreneurs and celebrate the contributions new and existing businesses registered in B.C., with fewer than 50 employees, make to their local communities and the global economy.

These outstanding businesses will now face a Dragons' Den-style panel of business experts who will determine the winner in each category. 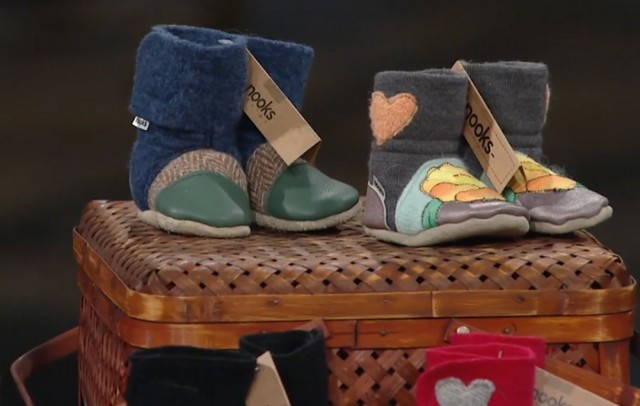 Nooks Design http://www.nooksdesign.ca/ have found a Dragon partner to work with.

The Kelowna company was featured on the CBC program Dragons' Den Wednesday night.

In the episode, taped back in May, Nooks Design asked for a $100,000 investment in exchange for 15 per cent of the company.

They had four dragons interested in investing, but settled on Manjit Minhas, who offered the money for a six per cent royalty instead of equity in the company.

Louis-Philippe Lavoie who, along his wife, Ruthy Penner, started the company four year ago, said he remains happy with the royalty deal.

"The royalty I think is going to work out in everybody's favour, because Manjit has a lot on her plate, and by no means is she interested in managing another business," said Lavoie.

"The royalty aspect is a good way for everyone to maximize benefits from the deal without having to involve too many people in the management of the company."

Seven months after the deal was struck, they are still negotiating the finalization of that deal.

There are times when a deal made on the program does not get completed.

Many businesses that appear in The Den get an initial bump after the show aired, whether they get a deal or not.

Lavoie said they have felt the "Dragon Effect."

"We've gained three new wholesale accounts overnight. We've had quite a few sales come through, and a lot of interest.

"More importantly, I think it re-established that we do intend on maintaining that cottage industry feel despite the volumes getting larger. Our plan is to remain true to our roots and true to the cause we originally created."

The entire pitch rarely makes it to air. Lavoie said the seven minute segment on the show was actually about 47 minutes in real time.

While much of the pitch didn't get to air, he said he was pleased with the way the episode was edited and produced.

Nooks Design, named after their oldest daughter Anouk, are shoes and clothing for children made out of pre-loved items.

Along with their success on the show, the company also agreed to participate in a commercial for Canada Post, one of the sponsors of the show.